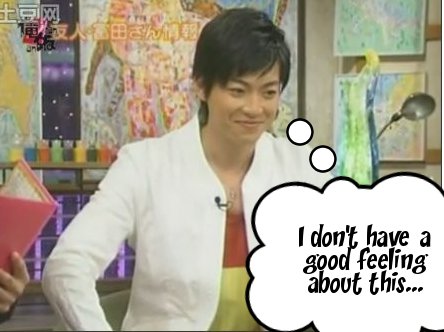 You know an actor’s stock is on the rise when fans start unearthing all kinds of pictures and videos that 98% of the fandom didn’t even know existed. Currently making the rounds on Tumblr is an episode of Oshareism that Daito Shunsuke appeared on as a guest back in 2009.

Half the fun of watching a Japanese or Korean variety show lies in seeing the host or PD embarrass the hell out of his or her celebrity guest. Yes, schadenfreude is best served with a huge side of pretty :D

In this episode, Daito-kun learns that you should keep your friends close and your childhood buddies even closer because you never know when they might be asked to dish the dirt on you XDDDD

So, we all know that Daito has been playing the BAMF in Crows Zero, Tumbling and Ouran. In reality, however, the boy’s quite the opposite, according to his childhood buddy Tomita. In school, they were often harassed by bullies and Daito, being faster, would run off and leave him behind, returning only after they had left. And if that wasn’t bad enough, he’d then say to a very angry Tomita: “You’re okay, right?” [Tries to imagine a young Daito being an idiot. Don’t know whether to laugh or facepalm.]

And what is Daito’s rationale for running away? One should be responsible for one’s own safety. [*Wipes away tears along with Fujiki Naohito & Co* Well, at least you know the boy’s instinct for self-preservation is alive and well XD]

Ueda: If we were in the army together, I would definitely not want to be in the same troop as you!

The conversation then moves on to the subject of girls and not surprisingly, Daito was already very popular with the ladies even before his voice broke. 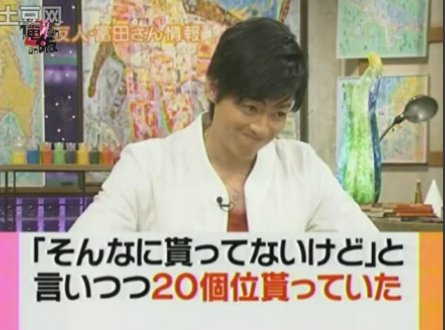 Ueda: [Reading from Tomita’s note] I asked him how many chocolates he received on Valentine’s Day and he told me not that many. I later found out he had actually gotten 20. [Turning to the audience] These kind of people are really annoying!

And now for the really fun part. Poor Daito doesn’t suspect a thing when Mori Izumi asks him how old he was when he had his first girlfriend (answer: 11). It’s so cute seeing him blush and stumble over his words while Ueda keeps egging him on to spill the beans (“Come on, tell us! After all, it happened such a loooong time ago. “)

It turns out that Daito was too shy to tell his classmate that he liked her so he enlisted the help of the ever reliable Tomita-kun to play the role of messenger. Long story short, puppy love blossomed between the two and Daito, being quite the romantic, even wrote her a note because there were no cell phones back then.

Btw, Mori’s expression as she listens to him shyly baring his heart about his first love is pure GOLD. Poor, poor Daito…XDDD 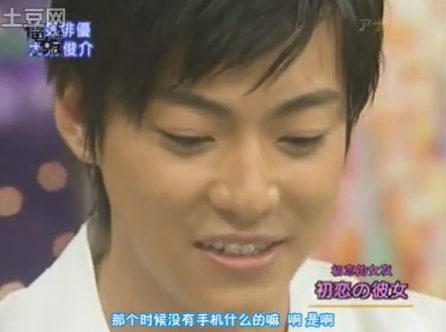 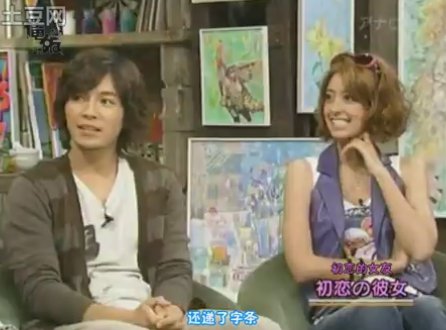 You know something is up when Fujiki whips out a copy of Daito’s elementary school yearbook (provided by the ever helpful Tomita, natch. I can just imagine the conversation he had with the Oshareism staff: Yeah, me and Shunsuke go way back. I knew him when he was a little punk who didn’t know how to talk to girls…XD) Half of me wants him to feign a stomachache and go hide in the toilet while the other half is standing by with a shovel so he can use it to dig a hole that he can crawl into later.

This is Daito when he was 11. I know, Ueda & Co can’t believe it either and Daito’s all, “I was really shy back then.” Honey, if that’s the case, all I can say is that puberty did wonders for your shyness.

And this is his elementary school sweetheart, Ayaka-chan: 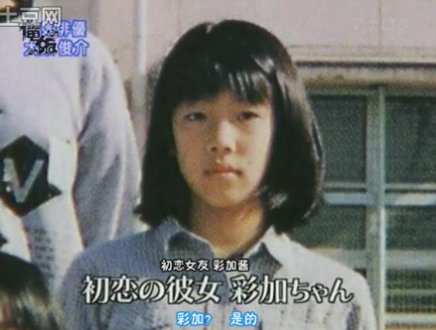 Unfortunately, their romance was short-lived. After graduation, Ayaka-chan and her family moved away, never to be seen again…or so Daito thinks until Fujiki casually informs him that she is in the studio. 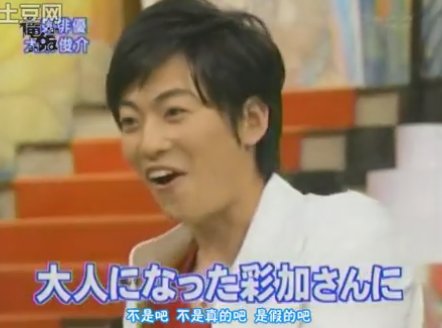 Hahahahaha, THE WAY DAITO PANICS. It’s like his heart is about to fail him…I’m sorry, Daito baby. I know I shouldn’t be laughing but *sputtersROFLdies XDDDD*

Poor Daito is so embarrassed he can’t even turn his head to look at Ayaka (who is really very pretty btw.) Meanwhile everyone else (notably Ueda) is laughing their asses off in the background.

Ueda: Come on, just look at her.

Ueda then asks her if she still remembers the confession that Tomita delivered on Daito’s behalf. She says it happened after class and he told her something along the lines of “I’m here to tell you that Daito-kun really likes you.” (Awww…An 11-year old playing wingman for his friend. So. Cute.)

Asked what she found attractive about him, she says she felt he had a strong sense of justice.

Ueda: That’s not true! He’s the kind of person who will run away, you know. He isn’t really that righteous at all! (Poor Daito XD)

But Ayaka is really gracious about it and goes on to say that he was also very honest and nice. Awww…

However Ueda’s not done making Daito squirm yet! He asks her if she still remembers what was written in the note he gave her. I think Daito’s body language says it all… 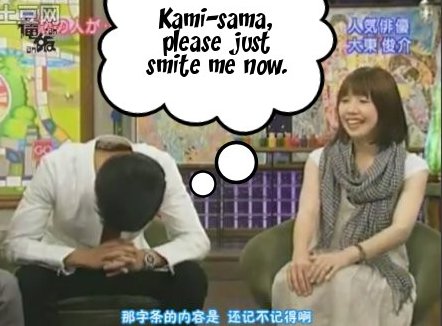 Fortunately for Daito (and unfortunately for us), not only does Ayaka not remember what was in the note, she also doesn’t remember getting one. You can probably tell that Daito spent a lot of time on that note because he remembers it very well and he cannot believe that she’s forgotten all about it. Mori and Fujihito are clearly enjoying this a lot (as am I XDDDD)

Well baby, you’ve got to choose between being completely mortified and having your ego crushed. You can’t have both, you know. XP

The conversation then moves on to the photo they took together at their graduation ceremony. It’s something they both remember very well because it was the last time they saw each other *sniff*

Daito, ever the fashionplate, decided to cut his fringe so that he’d look cooler but as you can imagine when you have an 11-year old with a pair of scissors, his plan backfired on him and it ended up being, er, not so kakkoi ^^;;; Daito says he was so embarrassed he didn’t want to take any photos but ended up taking some since it was their last day together. 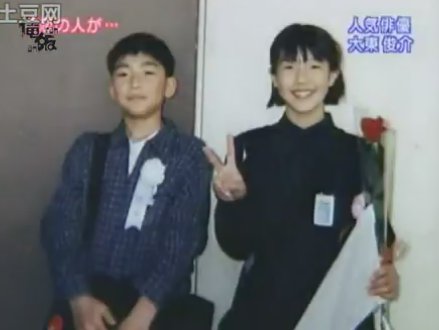 Ueda: Daito’s blushing so hard he looks like he has two huge bruises! (I think this is what Ueda meant. I know they were making a reference to how he was blushing like crazy.)

Ueda: Even though they’re both the same age, she has the air of an adult. It’s like looking at a mother and son who have come to attend a parent-teacher meeting.

It turns out that taking photos was not the only thing they did. Both of them, together with Tomita and another girl, buried a time capsule. Again, Ayaka doesn’t remember anything, much to Daito’s disbelief and everyone else’s amusement…XD

Turns out that Daito wrote a letter to his future self and of course, it’s in the studio for everyone to see. (I suspect we have Tomita-kun to thank for this as well.)

“Yo! In 10 years, I will probably be 21. (Ueda: What do you mean “probably”? Of course you’ll be 21!) Will I be married by then? I’ll probably be married to a very beautiful and gentle woman who’s also a great cook. (You and practically every other single Japanese male, hon.)

Well, I don’t have anything else to say, so I’ll stop here. Till we meet again!” 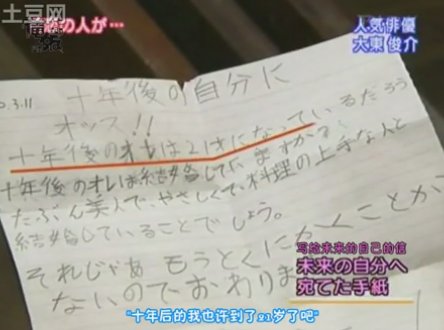 Ueda: Were you so unenthusiastic about writing to your future self that you could think of nothing else to say? LMFAO. Daito can’t believe that this is the letter he wrote to himself and I’m starting to think that his note to Ayaka was similarly uninspiring. I can’t imagine 11-year old Daito resorting to purple prose or writing poetry. Maybe that’s why she couldn’t remember anything XD

We’re nearing the end of this segment and Ueda asks Daito if he’d fall for Ayaka again. (Mori: How about going on a date?”)

Daito has so much trouble forming a coherent sentence that he can’t even get the words out of his mouth. But as it turns out, it isn’t his decision to make because Ayaka is already married with a daughter.

It’s kind of cute how quickly he jumps out of his seat to go carry her and how the squeals in the audience go up when he does so. 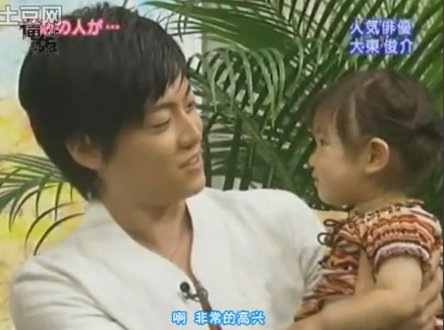 And the look he gives her. Aww…*melts* Here’s a suggestion for you, Daito. Instead of playing the sexy BAMF like you always do, how about playing a sexy BAMF who finds himself saddled with a toddler/child a la Choi Si Won in Oh My Lady (or better yet, a la Won Bin in The Man From Nowhere)? Bonus points if you find creative ways to lose your clothes in every episode. I know I’d watch that drama. Hell, I’d frickin fund that drama just to make it happen XDDD