In my earlier post, I said I’d give Rooftop Prince a few more episodes to see whether there was any improvement in the story or writing.

While this drama has its entertaining moments, the aggravating portions far outweigh the funny ones. And because I am no longer a masochist, I am going to drop it before I grind my teeth down to stubs and punch something.

Three reasons why Rooftop Prince isn’t doing it for me

1. I can’t watch this drama abuse its heroine any longer: I don’t dislike Park Ha as a character but what wears my patience thin is how this writer keeps manufacturing various FML obstacles and coincidences so she’s forced to continue enduring one ridiculous injustice after another. I’m assuming that this is to reinforce the idea that she is a plucky heroine with an unassailable spirit — no matter how many curve balls you keep throwing at her, she’ll keep bouncing back up just like one of those inflatable bop bags. Whoopee!

To be sure, the ability to keep one’s chin up during trying times is an admirable trait but the abuse that Park Ha has been getting at the hands of Se-na and Tae-yong’s grandmother is just plain ridiculous. Sure, the heroine has to overcome a series of obstacles before she triumphs over the bad guys but there are less over-the-top and melodramatic ways of testing her mettle. Really, how many times does she have to get slapped? It sucks that Rooftop Prince isn’t interested in creating a legitimate rivalry based on the women’s abilities. All it’s interested in is making broad generalisations and hammering home the point that Se-na is a toxic bitch while Park Ha is the filial and long-suffering maiden of virtue. Urgh.

As I mentioned earlier, the writing for this drama isn’t top-notch and this is painfully evident in the development of Park Ha’s character. She seems like a sensible woman who’s had a decent education and yet, she appears to have only one goal in life — selling vegetables. ETA: I wouldn’t have an issue with this if the drama had portrayed her as someone who wanted to be her own boss but this simply isn’t the case. When we first see her, she’s selling fruit from a street cart and working as a part-time waitress in New York. After returning to Korea, she takes up a job at her stepmother’s fish stall and then makes plans to open her own vegetable shop. When that falls through, she basically just spends her time babysitting J4 till her stepmom guilts Tae-moo into giving her a job. Does Park Ha really like selling vegetables all that much or is the writer trying to tell us that apart from performing domestic and miscellaneous chores, she has no other employable skills or aspirations? Or maybe she won’t be as convincing a plucky heroine if she isn’t poor and downtrodden? Attention K-dramas: you need to update this trope. STAT.

In addition, I have to wonder if the writer has ever seen what happens when two women hate each other’s guts. No sane woman is just going to keep quiet and put up with Se-na’s crap especially when she knows that the latter is Evil Incarnate and out to ruin her life. But I guess this is just the writer’s ham-fisted way of showing that Park Ha is morally superior to her stepsister. All I will say is that after putting her through so much rubbish, Se-na had better get her comeuppance.

2. I can’t watch Se-na get away with bloody murder any longer: Every time I see her, I want to stab her with Park Ha’s chopsticks — and I’m sure I’m not the only one who feels this way. It doesn’t help that I’m not particularly fond of Jung Yu-mi’s style of acting (just in case you were wondering, I didn’t like her character in A Thousand Days’ Promise either.) 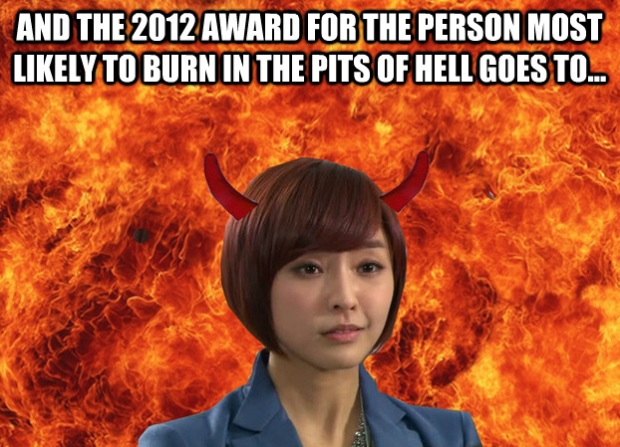 3. Lee-Gak ordering Park Ha around drives me nuts: Yes, I know he’s a Crown Prince from the Joseon era and has rather archaic notions of gender relations. Yes, I know that beneath that haughty veneer, he’s actually a sweet and caring person. However it still does’t change the fact that I want to punch him every time he yells at Park Ha. I was willing to cut him some slack in the earlier episodes and allow him time to acclimatise to his surroundings but when the drama is nearing its halfway mark and he’s still ordering her around and treating her like his maid, especially in front of Se-na, it’s time someone’s fist connected with his face.

I was hoping that his sojourn in the modern world would make him realise just how much relationships between men and women have changed but it looks like wishful thinking on my part. I’m not expecting him to return to his kingdom and pass a law declaring that women have the same rights as men but what I would like is for him to acknowledge that there’s so much more women can do apart from the chores traditionally assigned to them. But I don’t think Rooftop Prince is interested in delivering any message of this sort. God forbid Lee Gak ever has a moment of introspection and starts questioning his divine right to rule.

In sum: Sorry, Rooftop Prince. I wanted to like you but my dentist tells me that I have to make a choice between you and my molars, so my teeth it is then.