So in case you haven’t heard, the GTO remake began its run last week. I wasn’t interested in checking it out but ever since I found out that Takimoto Miori was cast in the role of Fuyutsuki Asuza, morbid curiosity has been threatening to get the better of me. Seriously, did Japan run out of actresses in their mid-20s? I would rather have seen Sawajiri Erika (isn’t she looking for a job?) or even Iwasa Mayuko (who is actually quite a versatile actress despite what her gravure idol image might have you think) play this character — if nothing else, at least you can count on them to bring some spice to the role. Plus, HamsapSukebe’s review of the first episode has also made me very curious. That Kawaguchi Haruna has the potential to be on par with Nakamura Aimi’s Queen Bitch Miyabi is interesting since the only thing I’ve seen Kawaguchi in is Ouran and let’s just say she was very raw in that drama.

Anyway, reading about the remake got me thinking about the 1998 series, which remains a nostalgic favourite of mine. I can still remember waiting impatiently for each new episode to air, not to mention playing Poison on loop and admiring Kubozuka Yosuke’s profile.

GTO is by no means a perfect drama. It has its flaws and watching the episodes again after 14 years makes them even more obvious. But even though this drama may seem a little dated now, Sorimachi Takashi’s charismatic performance is timeless and the chemistry between him and the students remains wonderfully addictive.

So without further ado, here’s a fond look back at Class 2-4 and the bestest sensei that ever was. 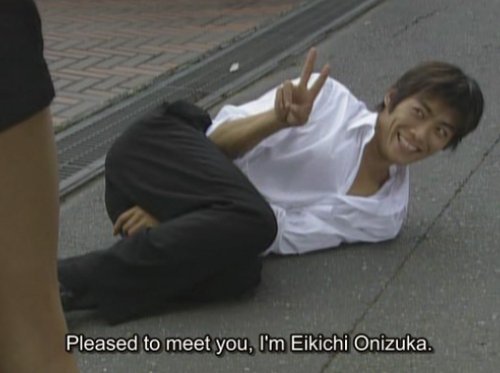 Whether you enjoy GTO or not depends on how much you like Sorimachi’s performance because it is what carries this entire drama. You could have swapped out any one of the kids (and I will argue even Matsushima Nanako) and it wouldn’t have made a huge dent on the drama because they are not its heart and soul. Onizuka is and hence the importance of getting the right actor to play the role.

In Sorimachi, the casting crew found just the person they needed. Back then, he was a newly minted heartthrob coming fresh off the success of Beach Boys and Virgin Road so that more or less guaranteed that he’d be able to pull a sizeable TV audience. His rugged and carefree image, which was cultivated in part by his (short-lived) foray into rock music, was also another factor that made him a good fit for the role of the ex-motorcycle gang leader turned high school teacher. Here’s a clip of him singing Forever from the Beach Boys OST:

I never cared for Sorimachi before watching GTO (and I’ve never really wanted to watch him in anything else, to be honest) but his larger-than-life performance as Onizuka will always be my yardstick when it comes to rating teachers in high school dramas. The acting is over the top, to be sure, but it’s also effervescent and Sorimachi as Onizuka is just so damn fun to watch.

No Japanese high school drama is complete without a heavy dose of inspirational platitudes but Sorimachi delivers them without going overboard with the cheese. He knows when to tell his students what they need to hear and when to open a can of whoopass and teach them a lesson.

You will never find him going on and on about dreams and passion like a broken tape recorder. After watching the first four episodes of Rookies, I have new-found appreciation for Onizuka’s laissez-faire style of classroom leadership.

Sorimachi put so much of himself into Onizuka that he’s never really been able to shrug off his GTO persona, much to the detriment of his career. It’s a little like Mark Hamill not being able to escape Luke Skywalker’s shadow. Since GTO, Sorimachi has never had another hit role that brought him the same level of success. There are a number of reasons for this and I think it might also have something to do with the fact that he doesn’t have a very malleable image so it limits the kind of roles that casting directors consider him for. Whatever it is, for many he will always be Great Teacher Onizuka, whether he likes it or not. 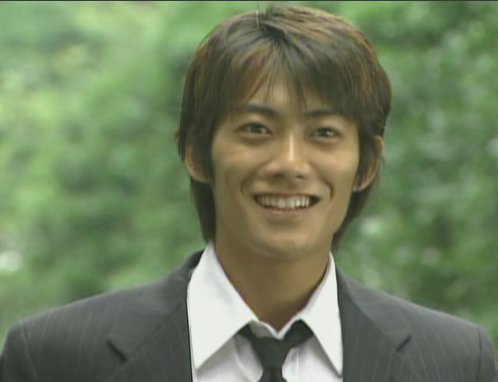 $64 million question: Is he going to make a cameo in the remake?

I know Matsushima Nanako has a lot of fans but I’ve never found her to be a particularly strong actress though I do think she’s a very image-savvy one. Which  Japanese actress isn’t, you might ask, but she’s done it particularly well by a) being very shrewd about the kind of projects that she takes on and b) cultivating an image as an elegant yamato nadeshiko that’s made her unsulliable in the minds of many.

I don’t have any strong feelings about Fuyutsuki. On her own, I think she’s a dull character. Sure, she changes over the course of the show but the journey she undergoes is predictable and not particularly inspiring (for me, at least.) Having said that, I’m aware the manga character is quite different and I think Drama Fuyutsuki is also very much a product of the social climate back then. If my memory doesn’t fail me, there were probably only four respectable professions for Japanese female drama characters in the 90s — teacher, air stewardess, OL and news caster — with marriage being the ultimate goal for all of them. Which is also why I’m surprised by the direction that the remake is taking. I would have thought they’d update Fuyutsuki’s character and make her more relevant to a 21st century audience but so far, this doesn’t seem to be happening at all :(

Anyway, fortunately Matsushima hit it off really well with Sorimachi on set and it’s their chemistry that makes their interactions with each other so much fun to watch. As most of you know, they eventually got married and I am convinced that what we see onscreen is not acting but an extension of their growing attraction to each other. But hey, who’s complaining? Whatever works, works.

Back in the day, long before becoming an avowed nationalist and a reggae artist under the moniker Manji Line (or 卍LINE), Kubozuka played the computer genius and tsundere woobie Kikuchi Yoshito in GTO.

Kubozuka was still an unknown at the time but he brought depth to the role of Kikuchi and you kinda had a feeling you’d be seeing more of him in the future. One of my favourite scenes in episode 2 is the one where he gets into trouble with a bunch of hoodlums and has to ask Onizuka for help. I’ll admit I was glad to see him finally get his ass kicked for being such a supercilious brat but it’s also a nice little piece of subtle emoting from Kubozuka that shows how despite his know-it-all posturing, Kikuchi’s still very much a kid. 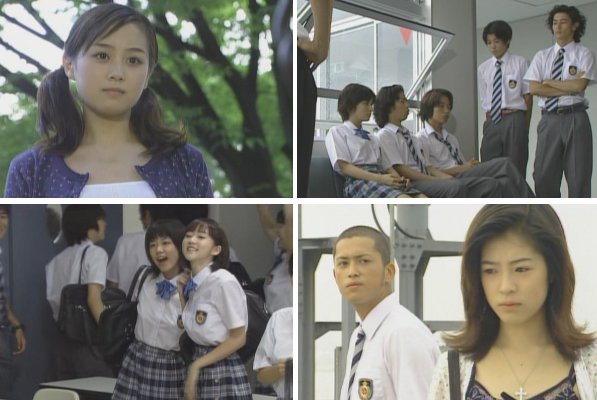 Nowadays, it’s the rare Japanese high school drama that doesn’t have at least one Johnny or AKB member in it. And it’s impossible to avoid the endless media blitz of promotions and interviews that accompany each new project. Not to say that I don’t enjoy some of them but let’s face it, they’re really a ploy to promote the idols, not so much the shows themselves so when you watch the drama, it’s really to support a certain idol, not because s/he is a good actress/actor (though which fan would admit that their favourite idol lacks talent?)

Unlike the remake, the GTO of 1998 wasn’t an idol-pushing drama. Class 2-4 was made up of a cast of unknowns. None of the kids went on variety shows to promote the drama and none of them became stars even though it was a massive hit across Asia. Kubozuka, Oguri Shun and Tokuyama Hidenori continued working in bit and supporting roles, only finding the break they needed years later (in fact, I had forgotten about Noboru and it wasn’t until I watched Gokusen that I found out that Shun had played the character in GTO.) You would have thought that Nakamura Aimi, so memorable as Miyabi, would have found more work but apart from roles in a few obscure movies and dramas, as well as the obligatory gravure projects, she’s all but disappeared from the scene.

That said, I think it’s the fact that they were mostly just a bunch of kids coming together to work on a project that gives the drama its earnest (and I mean this in a good way) charm. Even after all these years, I still think the rapport they have together is fantastic. It’s a very natural and organic kind of synergy that doesn’t feel forced or contrived. It would have been so cool if Fuji TV had gotten some of the kids as well as Sorimachi to provide a background commentary on some of the scenes — maybe they’ll do this for its 20th anniversary? XD

One of the things that never fails to amuse me is looking up an actor’s backlist on DramaWiki and finding out that they were in GTO. And then rewatching the episode to find out what they looked like back then. Haha.

Tamaki Hiroshi was just starting out in his career when he had this small walk-on role. His career has, as most of you know, since taken off and eclipsed Sorimachi’s.

Okay, so Naohito’s role isn’t so much a cameo as it is a supporting role but I remember being surprised to find out that he had played Onizuka’s ecchi friend because of the image he’s cultivated as a floppy-haired, soft-spoken corporate honcho, though lately he’s been playing quite a few cheating cads. (What’s the Japanese equivalent of a chaebol btw?) Someone should cast him as a sukebe in a drama — I think he’d enjoy it XD

So that’s it from me. What do you remember about GTO?