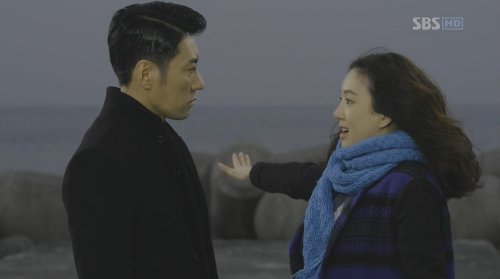 *SIGH* I am so conflicted about the romance in this drama. On the one hand, the final minutes of episode 11 had my squee going into overdrive. Good lord, did Kim Myung-min ever radiate this much sex appeal in his previous dramas? I can’t believe I’m actually contemplating revisiting Beethoven Virus to find out. Maybe I should just watch White Tower instead.

But back to The King of Dramas. So yes, there’s my ahjusshi perv hoping that Anthony will continue educating Writer Lee on the finer points of creating a credible melo romance.

On the other hand, my inner realist keeps reminding me that they have only known each other for a few months. Would you get into a relationship with your boss (of all people) when you barely know him? Yes, Go-eun’s managed to crack the slick, worldly façade that he’s cultivated so carefully for himself. In the process, she’s seen a side of him that he rarely reveals to anyone else but there are still many things that she doesn’t know about him. Anthony is a man with more baggage than a Louis Vuitton boutique. There’s a reason why he’s still single at his age and it sure as hell isn’t because he’s waiting for the right woman to come along.

Some people have pets to keep them company, Anthony has six TV screens.

It’s obvious they share an attraction and I’m all for their relationship developing into something more after they’ve worked together for a few years. What they have now is great, no doubt about it, but despite all that they’ve been through together, I wouldn’t really call them friends just yet. At the end of the day, he is still her boss and this is something that Anthony doesn’t let her forget even though he treats her differently from Mi-nah and the rest of the World Production boys.

Preferential treatment aside, there’s also the question of what someone in Go-eun’s position would do: Would a young writer who’s struggled for such a long time to break into the industry put her career on the line to enter into a relationship with her boss? What if the relationship doesn’t work out — where does that leave her? I don’t know about you but I know that these are questions I’d ask myself if I were ever in a similar situation and I hope this drama doesn’t sweep them under the carpet just to give viewers the instant gratification that they want.

That said, I think this is one of the limitations of having a single-season K-drama. Everything gets compressed into 16/20 episodes with the writer having to tie up all the loose ends by the time the last one airs. As a result, it sometimes feels as if characters are being shoehorned into a romantic relationship just for the sake of it. If you consider TV shows such as The X-Files or House M.D., despite all the UST between the characters, it took Mulder and Scully seven seasons before they got into an official relationship. With House and Cuddy, the build-up to their first kiss took five seasons. It takes time for relationships to grow and evolve. People don’t end up together simply because of a few heated looks and a dream. (Also, I believe that delayed gratification makes for a more satisfying pay-off in the long term.)

At any rate, before any further developments can take place on the romance front, this drama needs to take care of all the unresolved issues between Anthony and Mi-nah first, which is something that it hasn’t been doing too well. 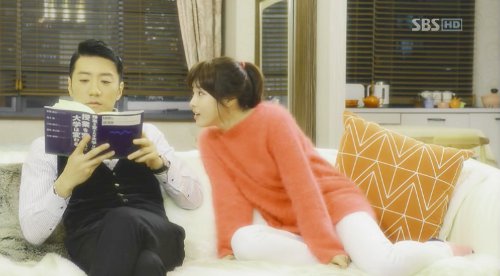 I don’t know if this is intentional but I feel that the energy of this drama tends to dip whenever the focus shifts to them. Personally, I find that even their flashback scenes seem awkward and leaden. For a drama that’s having so much fun taking the piss out of various behind-the-scenes shenanigans, I’m surprised the writers didn’t do the same with Anthony and Mi-nah’s relationship. Instead, they’ve veered into cliché territory, with the actress getting the shorter end of the writer’s stick. It’s too bad that Mi-nah is being portrayed as the stereotypical ex-girlfriend who doesn’t seem to understand that the man she loves no longer feels the same about her. Instead of regarding her as Go-eun’s rival, I actually find Mi-nah very sympathetic despite her uninspired conversations with Anthony.

In fact, I think that what’s been left unsaid between them is far more interesting than all the exchanges they’ve had since episode 7. One of the things I’m curious about is how they met. This BTS clip seems to suggest that she was the woman he stole from Hyun-min’s friend, which, if true, raises a few questions, the foremost one being: Why did he do it? Was it because he just wanted to have a fling with her or was he attracted to her untapped talent as an actress? If the latter, it would also say something about Anthony’s taste in women. He seems to be attracted to ingenues if his fondness for Go-eun is any indication.

On another note, the fact that Director Moo thought Anthony’s reluctance to hire Mi-nah was due to his feud with Oh Jin-wan, coupled with the look on PD Joo’s face when the director brought up her name, suggests that their relationship was known only to a few people at the time. Why keep it a secret? I suppose the drama will eventually shed light on why he left her without saying a word five years ago, though if you ask me, Anthony owes Mi-nah a proper explanation and quite possibly an apology. In order for her to move on, he should sit her down and be honest with her instead of being so cryptic about the whole issue. I think he owes her this much, at the very least. After all, he is asking someone who he hurt deeply to act in his drama (the fact that she is getting paid to do so is beside the point.)

I’m hoping this drama resolves whatever it is they have between them already so that Mi-nah can move on. I think she’s been handling the whole situation with considerable grace despite sounding like the stereotypical clingy ex. It’s not like she went looking for him first or that she sends him a thousand text messages a day now that he’s re-entered her life. That said, as much as I’m willing to cut her some slack, I do think this drama needs to have her come to terms with the present and stop living in the past stat. After all, there are only four episodes of this drama left — or is it eight? I’d much rather see her trolling the hell out of Hyun-min (which reminds me, I can’t wait to see what she has in store for him after that garlic fiasco) than listen to her having the same conversation with Anthony on the rooftop/in the cafe over and over again.