The story so far: Mizukawa Asami plays Tsuyama Shio, a 30-year-old singleton way too obliging for her own good. Because her boss knows she won’t kick up a fuss, he has her transferred to an ailing branch office that no one with any career preservation instincts would dream of walking within a 10-mile radius.

Owing to her personality, Shio is forever alone — but not for much longer! Deciding to take charge of her life, she moves from her small lonely apartment into a shared tree house with Kawaki Tappei, an alien (yes, you read that right and no, she doesn’t know Oizumi Yo is from outer space) and a brooding ex-salaryman (Tanihara Shosuke) who may or may not have feelings for said extra-terrestrial. So cue lots of hilarity and hijinks, right?

I’d love to tell you that this drama is pure crack and that you should bump it up your To Watch list asap. However despite the fact that I like Mizukawa and her roomies, this drama confuses me and by the end of episode two, I was starting to get really bored.

When I first read the synopsis of this drama, I thought it was going to be about Shio finding her groove back. The set-up in the first episode certainly doesn’t disabuse this notion, with Mizukawa turning in a sympathetic portrayal of a woman whose aversion to causing offense and fear of getting hurt have caused her to lead a safe albeit lonely life.

Early on, we’re also introduced to Sakurai Yukiya (Tanihara Shosuke), a man in the throes of a personal crisis. As we soon find out, his wife wants a divorce and has taken to raising their son on her own in the countryside. Whether this has anything to do with him quitting (or getting fired from) his job is unclear at the moment but what is obvious is that Yukiya is not the happiest camper around. 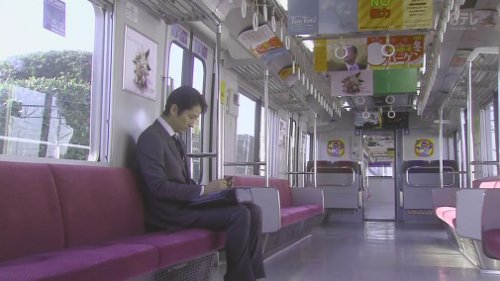 Because breathing costs money, he takes up a job as a cashier at the supermarket that Shio frequents. She is instantly smitten (partly because she hasn’t talked to a living male specimen outside her work place in ages.) He is oblivious to her existence.

All this might make Shio sound a little pathetic but it’s precisely this sad state of affairs that makes her realise that she needs to do something about her situation, which she does when she comes across a mysterious tree house that happens to be looking for tenants. So yay for taking that first step forward.

Of our three leads, Tappei is the one that requires you to suspend your disbelief the most. He’s basically an alien who can hear/feel the distress in people’s hearts…how he manages to get any sleep is beyond me but there you go. But I am willing to accept this fantastical scenario as long as the drama is able to make an adequate case for his decision to crash land on earth to help Shio out. I know she’s unhappy but given that she is living in a country with one of the highest suicide rates in the world, I’m pretty sure that there are other people who are having a rougher time. So why Shio?

As you can see, we have three characters, each of whom has an interesting story to tell. Unfortunately, Share House doesn’t seem to realise the potential it has in its hands.

The problem begins after Shio moves into the tree house and the tone of the drama changes. I get the feeling that it’s trying to be a wacky sitcom about the things that happen when you have a bunch of strangers living together. That’s the only reason I can think of to explain all the talk about house rules and why it’s spending so much time on peripheral and secondary characters that I could care less about. Case in point, the housemate with the hangup about her age in episode 1. Apart from wailing about her age and creating a lot of unnecessary noise, the only other thing she managed to do was make me wonder why she was taking up so much screen time when it could have been put to better use.

At the end of episode 2, I don’t feel like I know these characters any better. If anything, I’m finding it difficult to remain invested in them, which is frustrating because Mizukawa, Tanihara and Oizumi are capable of delivering much better performances. Tanihara, in particular, is being wasted in such an egregious fashion that it’s like watching someone mix Coke with a single malt Scotch. This drama seems intent on having him give a masterclass in brooding — that more or less sums up what he’s been doing so far in these two episodes.

Well, that and getting touchy feely with Tappei.

I can guess what you’re thinking but I wouldn’t get too excited about this. At the rate things are going, I doubt Share House is going to offer any meaningful explanation of Yukiya’s attraction to Tappei. I could be wrong but I don’t think this is the kind of drama that wants to peer too closely at the issue of gay married men in Japan.

Still, even without delving too much into this issue, I think there’s a lot the drama could do with the three main characters without the need to include the majority of the other sub-plots. I don’t really care about Tappei’s extra-terrestrial colleague at the supermarket or (at the risk of sounding unfeeling) Yukiya’s young son, who I feel is a manipulative addition to the story.

Your Sister’s Life, Her Choice

And while I find Nakajima Yuto kinda cute (I can’t believe that he played Kame’s little brother in Nobuta wo Produce. Kids these days, they grow up so fast T.T), his character gives me a major case of eye rollage. 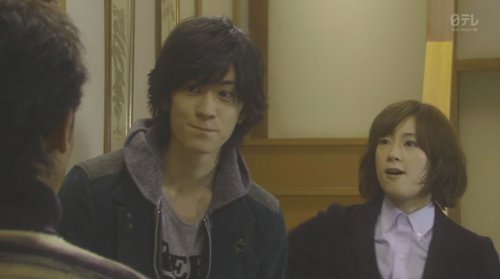 I can understand his concern for his sister but I just want to shake him every time he tells Shio that she should move out of the house because a) she’s 30 and single and b) she’s not going to get married if she keeps staying there. I’d be more inclined to close an eye (or rather, ear) to this if he belonged to an earlier generation but the kid is a college undergrad — shouldn’t his views be, I don’t know, more progressive? *palm shades forehead* Maybe this is one of the reasons why Japan’s economy is in the doldrums? Because it keeps clinging to these outdated ideals about women’s roles in society?

And then there’s his girlfriend, Kaoru, who I think has the potential to be an interesting foil to Shio. While the older woman tends to be meek and cautious, she’s assertive and confident. Kaoru knows what she wants and she’s not afraid to do what it takes to get it. The only thing is that Kawaguchi Haruna just isn’t the right fit for the role. Look, I think she’s very pretty and I’d like to see her do well in the entertainment business but in order to do that, Ken-On really needs to send her for acting classes first. Kawaguchi may be photogenic but she doesn’t have much range and this is becoming very apparent as she gets cast in more mature roles. There’s not much depth in her portrayal of Kaoru and it’s like watching a kid play an adult.

On a side note, I am actually a bit concerned about the trajectory her career is taking. If you compare her with her agency mate Shida Mirai, it’s clear the latter is being cast in more dramatic roles while Kawaguchi is getting the trendy popcorn franchises. Also, I find it a little disconcerting that she’s just going to devote herself to her entertainment career after graduating from high school. If that’s really the case, I hope whoever’s her manager does a good job of guiding her because acting isn’t just about being cast in as many projects as possible and looking pretty in front of the camera.

I’m going to give this drama another episode or two to see where it goes but suffice it to say that I’m not getting my hopes up for this one.

[9 Feb 2013]: After watching episode 3, I have no qualms about dropping this drama. I feel sorry for Mizukawa that her first starring vehicle is such a boring-assed one; this story is not going anywhere and the acting is generally quite pedestrian across the board. It pains me to see Yo Oizumi overacting this much and every time I see Kawaguchi Haruna try to dead-fish-kiss someone, I cringe. It’s so awkward and clearly, she has no idea what she’s doing. Ken-on, can you please give her time to grow up and get comfortable with her sexuality before pushing her into these roles?