(I promise I haven’t abandoned this blog and will be replying to comments in due course!)

What I’m watching this season:

I didn’t think the current J-drama season was going to be this good. There are a few more shows that I have my eyes on and I still have Hitori Shizuka and Tsumi no Batsu (though I’m going to have to wait till I’m in a nihilistic mood for this one) from last year. Not following any K-dramas at the moment — I need a break from the endless parade of chaebols, “geniuses”, plucky heroines and romantic contrivances. Yes, I am still bitter about the last few episodes of The King of Dramas. 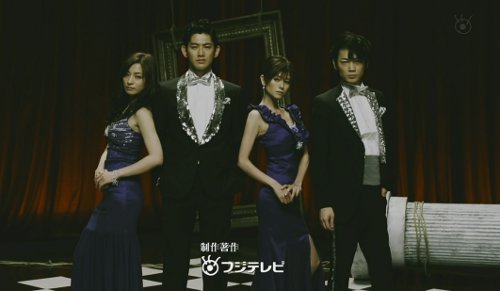 Soredemo, Ikite Yuku turned me into an instant Sakamoto Yuji fan and I was curious to see how he would fare tackling comedy, especially since this is the first time since 2008’s Ryokiteki na Kanojo* that he’s returned to this genre.

What I like so far: Its frank portrayal of relationships or to be more precise, its lack of dewy-eyed idealism about love and marriage. Though I don’t know enough about the characters at this point, I’m enjoying the contentious and hilariously petty relationship between Eita’s and Ono Machiko’s characters. 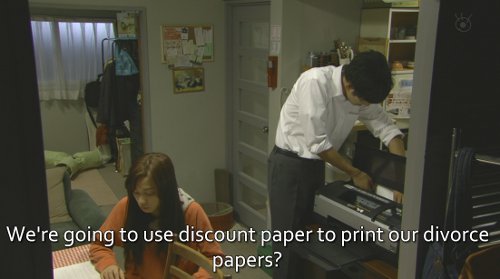 Sometimes you watch a drama and you wonder if the writer has ever been around married couples in real life. I don’t know if Sakamoto is married but it’s obvious that he’s done his research. There’s snap to the dialogue and a sense of candour that reminds me of Kekkon Dekinai Otoko. I especially like the frank discussions about infidelity — this is something that crops up a lot in Japanese dramas but often times, it’s just swept under the rug and the characters behave as if cheating is a man’s birthright and that women just have to learn to live with it. Personally, I have mixed feelings about marriage but I do feel that if you’re going to take the plunge and have children, you should be prepared to commit to a monogamous union. That said, this drama reminds me of what my ex-colleague once told me — that the reason he didn’t want to get married was because he knew he’d cheat on his spouse. Well, whatever I might think of him, I can’t fault him for being dishonest there.

I haven’t watched episode 3 yet but I am so looking forward to this scene:

Thank you, Yuka! [gifs via FYAsianDrama]

So yes, this is a keeper for me, and I want to know what is up with Maki Yoko’s character and the open relationship that she has with her partner.

* After watching Saikou no Rikon, I am now very curious about Ryokiteki na Kanojo (aka the J-drama remake of the Korean movie, My Sassy Girl.) It’s considered one of his least successful projects and I want to know if this is because a) there wasn’t enough material for an 11-episode drama, b) if it had something to do with the writing/acting/directing or c) it was doomed because viewers had their knives out for the remake from the get-go. It helps that I have never seen My Sassy Girl so I’ll be able to watch the drama without making any comparisons between the two. 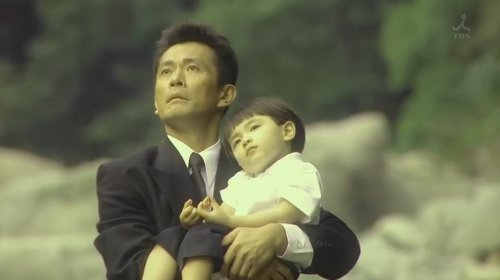 I was almost going to skip this one but decided to give it a chance because I was curious to see what Uchino Masaaki would bring to this drama.

I watched the first episode with extremely low expectations thinking that it was going to be a syrupy melodrama about how a mentally challenged man tries to become the best father that he can be. Not only did it turn out to be nothing like that, I also ended up inhaling the next three episodes in the space of 24 hours. I think that should tell you everything you need to know about my feelings for this show.

If there was one word I’d use to describe Tonbi, it would be old-fashioned. Maybe this has something to do with part of the story being set during an earlier age but there’s something about it that reminds me of those warm-hearted family dramas from the nineties. With all the insane nonsense going on in the world today, sometimes I just want to watch something that restores my faith in humanity, even if it’s just for 45 minutes. 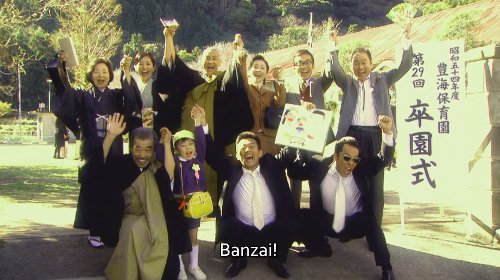 And this is what Tonbi does, thanks to Uchino and his co-stars. The story may revolve around the relationship between a father and his son but this drama would not be what it is without its ensemble of supporting characters, especially the chief priest Kaiun and Taeko-san (played wonderfully by Emoto Akira and Asou Yumi respectively). Or to put it another way, if Akira hadn’t grown up surrounded by this close-knit group, chances are he wouldn’t be the adult that he is. 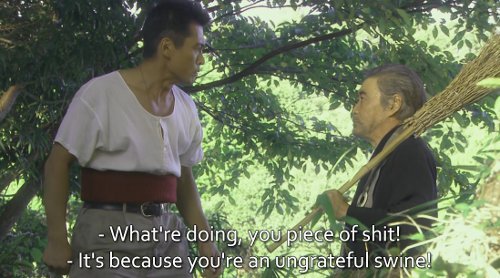 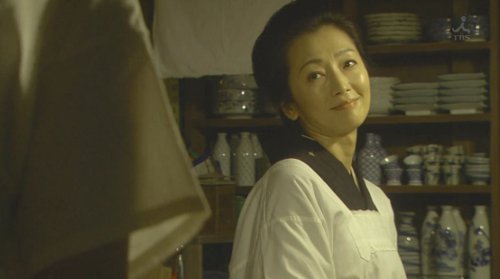 And though they don’t appear very often, I love Yasuo’s colleague with the delinquent hairdo (is there a name for this hairstyle, btw?) and his yankii wife. They’re hilarious. 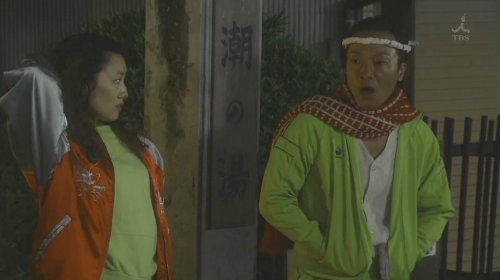 Sato Takeru is all right as the grown-up Akira but I do feel that Tonbi is really Uchino’s drama. When I see him play Yasuo, what I see is a man who is symbolic of a certain kind of old school Asian father — the type with a terrible mouth who is not very good at expressing his feelings.

Uchino does ham it up for laughs but at the same time, he also nails the less attractive facets of his character. I like that he doesn’t portray Yasuo as a wholly sympathetic character because he’s not. There are times when he’s even more of a child than his own son, and coupled with his stubbornness and working class sense of machismo, he often ends up pushing Akira away (especially as the latter gets older) even though he doesn’t mean to do so. 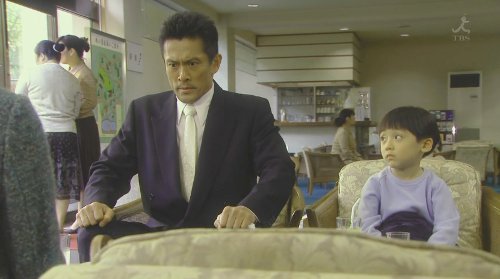 Verdict: This is hands down my favourite drama that’s airing right now. I love its tone and the parallel stories taking place in both the past and the present. I haven’t watched episode 7 yet (no spoilers, please) but am intrigued by the possibility that Yasuo might still be alive and the implications this would have on the rest of the episodes.

1) Tokiwa Takako has aged really well. She is so radiant as Misako that Yasuo would have to be blind not to be crazy about his wife. She looks so much better than some of her contemporaries. Heck, she looks better now than she did 10 years ago. Seriously, can you believe that this woman is 40? 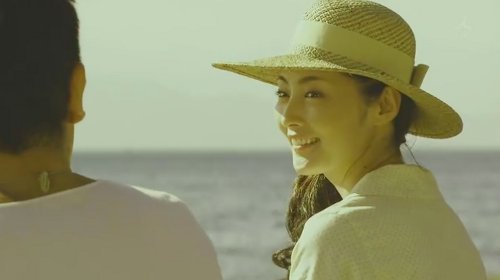 2) Sato Takeru has never done anything for me looks wise but seeing Akira with Kensuke is making me reconsider my indifference towards him. The screencap below beats any gravure photo I’ve seen of him. What does it say about me that I find him hotter here than as Kenshin? 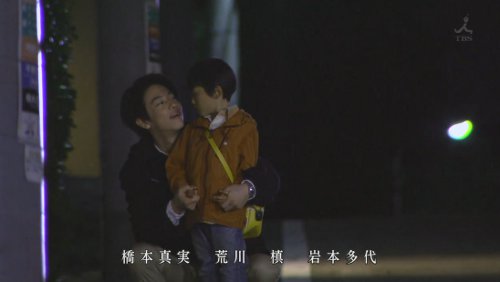 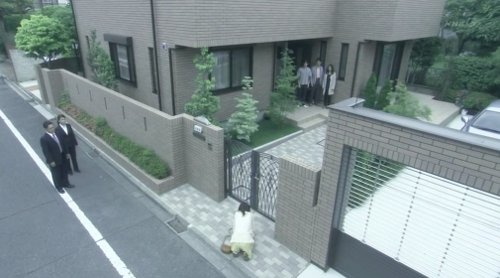 Never in a million years did I think that I was going to last more than an episode with this one.

I will confess that I am no Ueto Aya fan and that this is the first drama of hers that I’ve watched in seven years. If I wasn’t so shallow, I wouldn’t have bothered with it at all because I was pretty sure I’d end up rolling my eyes at Ueto’s character a lot and making liberal use of the FF button when I read its synopsis.

So why am I watching this drama?: I am strangely drawn to the relationship saga between the prodigal (underachieving) daughter and her Tiger Mom. For me, this is what constitutes the drama’s emotional core. Without it, Itsuka Hi no Ataru Basho de would just be another “ganbaru” drama. (Sadly, the boys are merely window dressing, so if you are watching with the sole intention to perv, you’ll be quite disappointed.)

Hako’s real crime is not that she scams men out of their money to support her host boyfriend but that she deviates from the path that’s been laid out for her. (Background: Ueto plays Komoriya Hako the daughter of a family that owns a wagashi (traditional Japanese confectionery) company. Hako has no interest in the family business and wants to be a pet groomer instead, which is a problem because a) her family is super conservative and b) her mother (Asano Atsuko) is one of those fierce High Expectations Asian Moms. Failure doesn’t exist in her vocabulary and no daughter of hers is going to style dogs for a living.

Long story short, emotionally vulnerable Hako falls for the honeyed words of a host and ends up committing crimes to support him. She is eventually caught and sentenced to seven years in prison, during which time her family goes about erasing her existence from their public lives.) 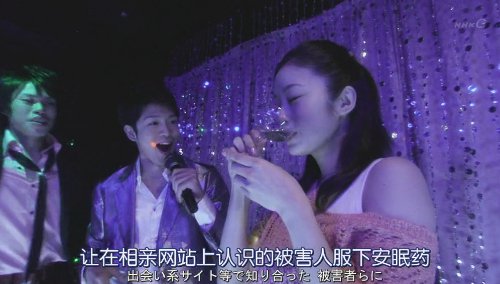 Should have watched The Great Happiness Space before going to a host club, Hako

I do wish that the drama had shown how the Komoriyas had gone about doing this, not just out of a morbid fascination on my part, but because it would also have provided a more balanced picture of how Hako’s crime had affected her family and their business. I don’t think her mother and brother are exaggerating when they tell her she has no idea how much they suffered but when you have Ueto playing the martyr and looking like a puppy that’s been kicked and abandoned, it does skew your sympathies unfairly. Consider this: If the character had been like Ando Sakura’s in Soredemo, Ikite Yuku, it would have made it more difficult to root for her and added another dimension to the story but I accept that this drama is not concerned with making you feel anything but sympathy for Hako (look, just because I don’t dislike the character doesn’t mean I’m not aware of the machinations that are being employed here.)

Considering the way the drama is progressing, it’s a matter of time before Hako’s mother cracks and allows her daughter back into the fold. What I find most interesting about their relationship at this point is her reason for refusing to have anything to do with Hako. I’d like to think that it’s more than just a face-saving exercise. The presence of her sister certainly suggests that there is another reason for this — in a nutshell, it’s a case of Hako failing to live up to her mother’s expectations. I’d like to see this drama delve deeper into its characters’ psyches but I’m not sure if it is really that interested in doing this. (On a side note, I also think they should have made Hako’s crime more severe. I’d have an easier time buying her black sheep status if she had accidentally killed one of her victims or had a history of causing trouble but then again, Oscar Pro (i.e. Ueto’s agency) would probably have had a cow if the script had required Ueto to sully her innocent image.)

Verdict: I wouldn’t say that Itsuka Hi no Ataru Basho de is an excellent drama — the acting could be better (Iljima Naoko, in particular, tends to overdo her character’s exuberance) and the writing could definitely afford to be less heavy handed — but I am surprised by how it manages to draw me into its world despite its flaws. I’m not sure if I will continue to feel this way about the later episodes (especially if Hako continues with her I-must-deny-myself-happiness-to-atone-for-my-sins mentality) but for now, it’s turning out to be a watchable show — and this is saying a lot given my feelings about Ueto. Still can’t believe I haven’t ground my teeth down to stubs yet.