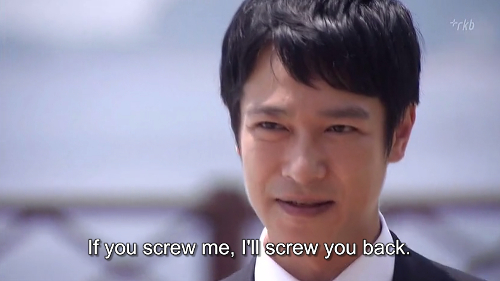 If you’ve been following the J-ent scene recently, you might have heard of Hanzawa Naoki, this summer’s most talked-about drama (in Japan, at least. The international blogosphere is another matter altogether.) Ratings are at an all-time high, with the last two episodes (i.e. eps 7 and 8) recording numbers in the 30th percentile. Not since the golden days of the KimuTaku era has a J-drama performed this well (even last year’s surprise hit, Kaseifu no Mita, didn’t surpass the 30 percent mark till the last episode.) So widespread is its popularity in the country that even the Wall Street Journal has written about it. When was the last time they wrote about a KimuTaku drama?

Naturally, I had to find out what all the fuss was about, especially given that this is a drama about fraud and corruption, not exactly topics to set most pulses racing.

First things first: if you’re coming into this expecting a cerebral thriller, please dial down your expectations. Hanzawa Naoki is a J-drama fantasy for disgruntled office workers who have wet dreams about running their boss over in a trailer truck. 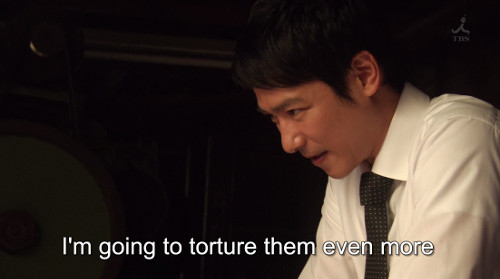 Forget about things like subtlety and complex characters — they are of secondary importance here. This is about living vicariously through the hero and wishing you had the brains and the guts to do half the things he does (without getting fired).

The Story So Far

This is our hero, Hanzawa Naoki (Sakai Masato): banker, loving husband, and champion of the little guy. (Yes, I know there’s probably an oxymoron in there somewhere.) 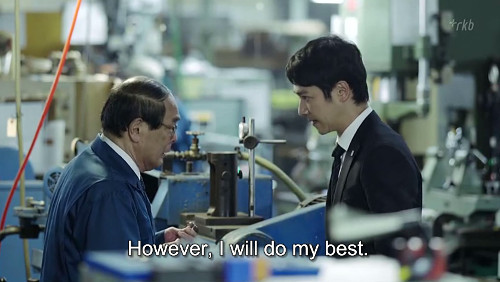 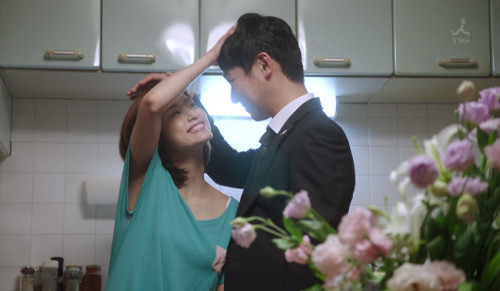 How old is your wife, Hanzawa? Five?

Lurking behind this mild-mannered façade is a man who is biding his time to exact revenge on the person responsible for his father’s death. Hanzawa gets an unexpected hand from his immediate superior when the latter waves aside his misgivings and forces him to approve a 500 million yen loan application made by a dodgy company. 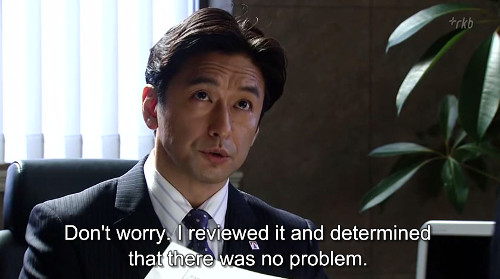 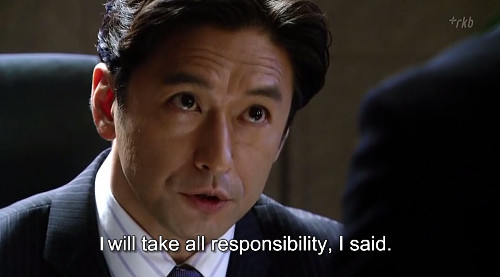 You don’t need an MBA to figure out what happens next. (Well, of course the company goes under and of course Hanzawa has to shoulder all the blame. Like duh.)

If he was expecting his subordinate to roll over and hand in his resignation letter, he should have chosen another scapegoat. The injustice of this entire situation unleashes Hanzawa’s Righteous Fury™… 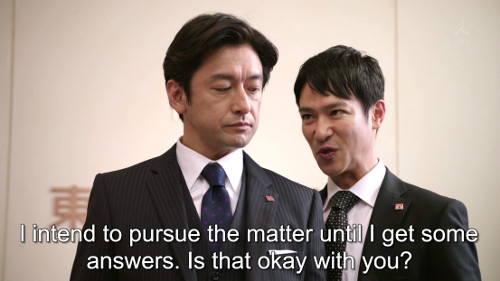 And as he uncovers more of his company’s nefarious misdeeds, you get the feeling that Hanzawa is just one popped vein away from initiating a HULK SMASH. RAWR!!!!!!! 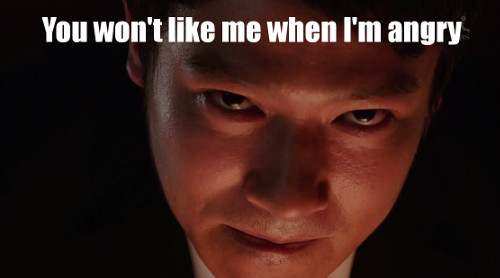 Speaking of which, I am a little concerned about the mental health of the characters in this drama. Some of them, like this guy below, look like they could be escapees from an asylum: 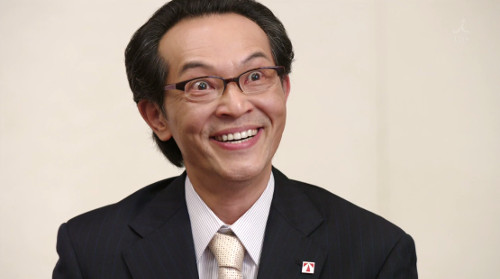 Word of advice, kids: If you’re considering a career in banking, better think carefully about it.

At any rate, Hanzawa’s handling of the case attracts the attention of this drama’s Final Boss: Executive Director Ohwada Akira (Kagawa Teruyuki), a man who obviously recognises talent when he see it. He tries to cajole Hanzawa into joining his faction at the bank. Unfortunately, there’s just one tiny little detail that he’s overlooked: he’s the reason that Hanzawa’s father committed suicide. (Highlight for the obvious) 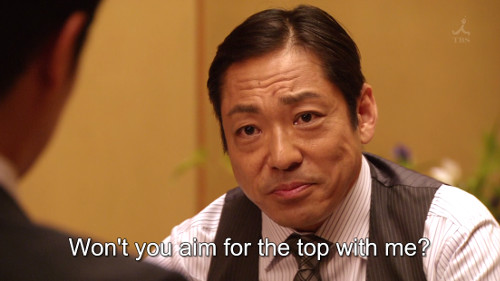 You’d think the fact that Hanzawa looks like he has a case of IBS would tip him off but perhaps having a spastic colon is par for the course for most bankers. 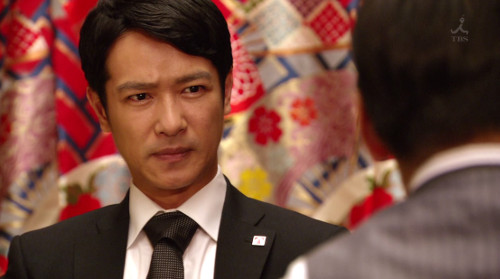 Ohkawa is in a different league compared to Hanzawa’s earlier adversaries (in terms of intelligence and Kagawa’s acting abilities), and it’s for this reason that I’m enjoying the second half of this drama more than the first one. Watching Hanzawa take his enemies down is fun but I do wish this show had a better writer and director because there is a compelling story at the heart of this drama and in the hands of the right team, it could have been a gripping conspiracy thriller. However what we get instead is a story that preaches about the moral responsibility of bankers.

The acting here is also strangely cartoony. Dramawiki tells me it’s supposed to be a suspense drama but I get the feeling that it doesn’t quite know what it wants to be. If Hanzawa Naoki were a live-action video game or manga adaptation like Ace Attorney or Nodame Cantabile, the OTT performances would not seem so incongruous but it isn’t, and you are left scratching your head and wondering why everyone is overacting like their lives depended on it. Why, for example, do all the villains behave as if they’re having a sudden attack of diarrhoea or about to get a heart attack every time Hanzawa gets the better of them? 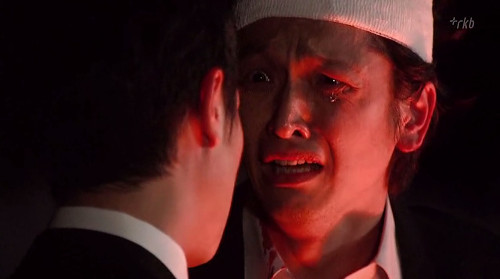 Hanzawa-san, could you excuse me, please? I need to make a quick dash to the toilet.

And I don’t know about you but I think Kurosaki the tax inspector missed his real calling. He should have been the papa-san of a cabaret club instead. 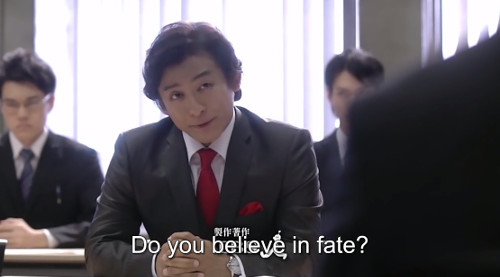 Er, not exactly but I do believe you’re in the wrong profession

Apart from the hammy acting, this drama also suffers from some curious casting choices: Ueto Aya is not convincing as Hana, Hanzawa’s spunky wife. I like the character and I can see where the drama is going with her but Ueto is just playing it cute and it sometimes feels like you’re watching Hanzawa interact with his sister more than his spouse. (They should have tried getting Kanno Miho i.e. Sakai’s real life wife to cameo as Hana instead.) Nakajima Yuto is another one who’s miscast here. He’s supposed to play a junior banker but watching him, you’d think he was just some random office boy instead.

This isn’t to say that Hanzawa Naoki is without any bright spots. If you can close an eye to the cartoony acting and treat this drama as escapist entertainment, it does get better as it moves into the second arc. I know many people are watching this for Sakai but for me, this series really picks up once the focus shifts to Ohwada. I enjoy watching Kagawa act (if you want to know, I liked his portrayal of the yakuza mole in the Japanese remake of Infernal Affairs more than Andy Lau’s, but I digress) and even though he’s hamming it up along with his colleagues in this drama, there’s a degree of depth to his character, which keeps him from being a one-dimensional villain. The exchange between Ohwada and Hanzawa at the end of episode 6 is one of the best scenes in this drama and imo, Kagawa totally owns it. If anything, Hanzawa’s preachiness does him a disservice and makes him appear one-dimensional. Again, I wish this drama had a better writer because there’s so much more they could have done with the conflict between these two characters instead of reducing it to a black and white moral argument.

All in all, Hanzawa Naoki is an entertaining, albeit flawed, drama with some unintentionally hilarious moments. Just don’t let the ratings mislead you into thinking that this show is the J-drama equivalent of Wall Street (or something like that) and you won’t be disappointed.