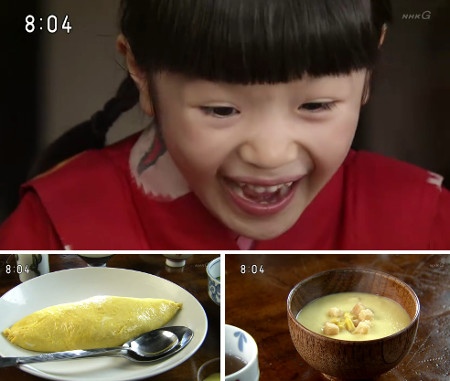 Note: Do not watch Gochisousan on an empty stomach or if you’re on a diet, unless you enjoy torturing yourself. I watched this late at night after I had already eaten and now, six episodes later, I have “omu rice” tattooed on my brain. Where the hell am I going to find Japanese omelette rice at 3 bloody a.m. in the morning? *stomach groooooooooowls*

This asadora is something I’ve been meaning to check out because a) it’s written by Morishita Yoshiko, the scriptwriter behind two of my favourite J-dramas, JIN and Tonbi 2013, and b) its cast includes Takahata Mitsuki, who I’ve been hoping to see more of on the small screen ever since she took me by surprise with her spitfire performance in the stage play Smart Motery Man.

Asadoras are morning dramas that chronicle the coming-of-age story of a female protagonist and the trials and tribulations she faces while working towards her dream vocation. As you may have guessed from its title and the pictures in this post, the theme of Gochisousan is food, and our heroine is Uno Meiko, a girl for whom life is one never-ending buffet. Despite barely reaching up to most people’s knees, she has the appetite of a Mongol warlord and the dexterity of a competitive eater. 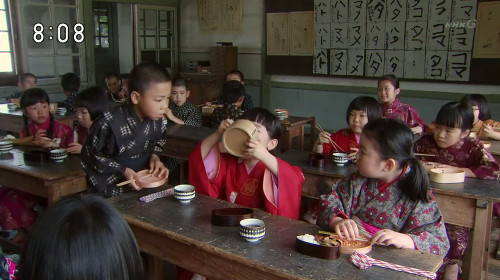 Too bad competitive eating didn’t exist during the Taisho period 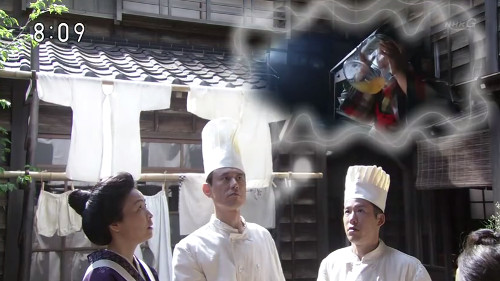 Who could possibly have eaten all the apricots in the preserves jar?

Luckily for her, her parents run a restaurant, which means she gets to wake up to a spread straight out of Gourmet Traveller every morning. (If she had been born into any other family, she’d probably have eaten them into bankruptcy XD)

It’s still early days for this asadora but I like its tone and, save for a few niggles (mostly concerning some of the child actors), what I’ve seen so far. Toyoshima Hana isn’t likely to take over Ashida Mana’s mantle (Suzuki Rio has first dibs on that, imo) but she is very cute as a pint-sized glutton whose actions are motivated entirely by her stomach. 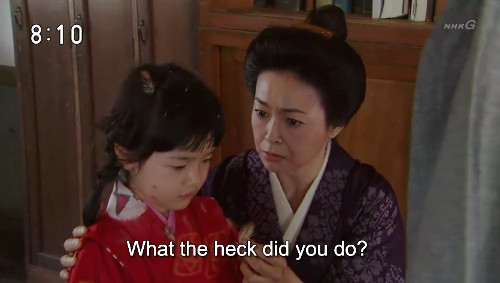 Few countries can rival Japan when it comes to capturing food on film and the cooking segments here are gorgeous to say the least. Even a simple act like cracking an egg looks like poetry in motion in this drama. And what I also like is the spotlight on yoshoku (Japanese-style western food) and how Japanese chefs adapted French dishes to suit local palates during the Taisho era. Suffice it to say that if you enjoy cooking and watching food programmes as much as I do, you should check this drama out. English subs are already out for week 1.

Looking ahead, I have not seen Anne in anything except for a few episodes of Yokai Ningen Bem (and if you must know, I was too busy snerking at Kame to pay her performance any attention XD). I’m curious to know what she’s going to bring to this role and where the story is going to take her character. I do hope it’s not going to be 144 episodes of her making orgasmic noises whenever she eats something because that’s going to get old really quickly. On another note, fans of xxxHOLIC might be interested to know that she’ll be reunited with Higashide Masahiro, whose character she will eventually marry.

So far, Gochisousen looks promising and let’s hope it will be able to maintain its momentum. If there’s one reservation I have about Morishita, it’s that I feel she’s better at adapting other people’s works into screenplays than coming up with original scripts. But who knows? She might prove me wrong here — and I’m hoping she does.