Along with the creation of the universe and Justin Bieber, the success story that is Winter Sonata continues to be one of the world’s greatest mysteries. Eight years have passed since the drama was first unleashed upon our idiot boxes and given that I’ve never watched a single episode of the series, what better time to do so than now? After all, doesn’t time help put things into perspective?

The Cast: Bae Yong Jun, Choi Ji Woo and…well, does anybody really care who else was in WS? Oh, you do? Um, maybe you should go here.

Preamble: Hello and welcome to the first episode recap of Winter Sonata, otherwise known as the drama that launched an entire cottage industry for scarves and showed the world that you don’t have to resort to brute force to conquer a country. All you need is a sensitive, floppy-haired pretty man who’s sincere and kind, and the nation’s housewives and aunties, not to mention $2.3 million worth of exports, are yours for the taking. (Are you listening, North Korea? Forget about your nuclear weapons—they’re outdated anyway—and start building up an army of ahjumma killers!)

Winter Sonata is the second of a four-part series called Endless Love. The rest are known as Autumn in My Heart, Summer Scent and Spring Waltz. If I didn’t know better, I’d have thought they were names from a room fragrance catalogue. But I digress. On with the show!

Caution: Over-exposure to contents may cause amnesia

The show opens with our heroine, Jung Yu Jin (Choi Ji Woo), running to the bus stop. In another time, in another place and in another drama, she would have been called a country bumpkin. As it is, she’s carrying a pink knapsack that looks better suited on a pre-schooler. I’m not sure if this was an attempt on the part of the director to shave 10 years off her age. Either there wasn’t a budget to hire child actors to play the characters’ younger selves or there was a major teen idol drought because these are the oldest-looking teenagers I have ever seen.

Once on board, she ends up falling asleep on the shoulder of a young man, who nudges her head away. She wakes up and hark! It is the Love of Her Life™ except they both don’t know it yet. They exchange a looong look, the kind where Time stops but public transportation doesn’t.

Too late, she realizes that she’s missed her stop and upon alighting from the bus, she whips around and demands to know why he didn’t wake her up since they’re from the same school. Turns out he’s new in town and couldn’t care less what Gargamel the Terrible (a.k.a. the discipline master)  has in store for latecomers.

Because it is an unspoken rule in Korean dramas that every major character in the show is connected by the all-powerful Law of Convenience, we find out that New Guy is a transfer student from Seoul and is in the same class as Yu Jin. His name is Kang Joon Sang and the girls immediately anoint him the new resident dreamboat, which isn’t surprising when you consider the rest of the competition:

Apart from being blessed with the kind of good looks that can reverse menopause, he’s also a genius who came in first in the National Math Olympiad. This is enough to seal it for Oh Che Lin (Park Sol Mi), who knows a good gene pool when she sees one and immediately stakes her claim on him: “He’s mine. Don’t even glance in his direction!” (This is a direct quote, btw.) 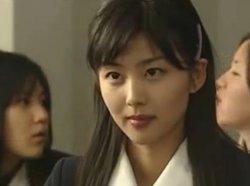 Unfortunately for Che Lin, he doesn’t share her sentiments and promptly rebuffs her. Class president Kim Sam Hyuk (Park Yong Ha) is given the same frosty reception when he asks Joon-sang which extra-curricular activity he wants to join.

He eventually signs up for the school radio club, which (surprise, surprise) just about everyone with a major role in this drama is a member of, when he finds out from Yu Jin that Sam Hyuk is part of it too.

Time to reveal Joon Sang for the genius that he is. At his first radio club session, everybody falls into a tizzy because they can’t get the sound system to work. Turns out, as Joon-sang demonstrates, that they’ve connected the cables wrong. Che Lin is just about ready to jump him.

If Joon-sang’s motivation for joining the radio club wasn’t a big enough clue, the show hits us with another one. With OMINOUS FORESHADOWING tattooed right across his forehead, he stares at Yu Jin and Sam Hyuk as they clean the classroom. 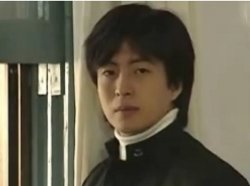 She picks up on it right away but Sam Hyuk is too lovesick to pay any attention to it. Poor, poor Sam Hyuk. If only you were there on the bus to transmit a psychic pledge of eternal love, but alas, it is not meant to be.

And because subtlety went out with the dinosaurs in this show, Yu Jin later tramples all over his heart when he offers a hand to support her (she has this thing for balancing on narrow ledges), saying, “You’re not my boyfriend. Why should I take your hand? Only that one special person will ever hold my hand.” Why don’t you just blow his heart out with a shotgun while you’re at it?

Meanwhile, Joon Sang is in the library leafing through old yearbooks. He stops at the picture of a male student and compares it with a photo of an older man standing with a woman. 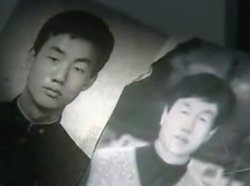 Later, he crashes a university math lecture and shows off his mad problem solving skills with an equation that even the professor has never seen before. The prof is even more surprised when he finds out that he’s only in high school. (His report card from his former school in Seoul probably looks something like this: Joon Sang has enormous potential but prefers to squander his time angsting instead of finding a cure for cancer or amnesia.) Remember the Law of Convenience? We find out that the prof is Sam Hyuk’s father.

Joon Sang goes home and what we have next is a lesson in passive aggressiveness. We find out that his mother is a classical concert pianist and that Joon Sang could have studied in the United States. However he chose to transfer to Podunk High because it’s the place where she met his father. She asks if he knows who his father is, to which he replies, “You tell me.”

Because the road to K-drama emo-hell is paved with misguided parental decisions, she tells him that his father is dead and that they are moving to the States after her concert tour. A normal person would have confronted her with the truth (thus sparing me the agony of watching the next 19 episodes) but since this is a K-drama, the angst needs to be given sufficient time to ferment, and he flounces off to stalk Sam Hyuk and his family as they have dinner. *wrings hands*

The next morning, Yu Jin falls asleep on the bus once again. This time, Joon Sang wakes her up and as luck would have it, Gargamel the Terrible is already roasting students on a spit (or something to the same effect).

They steal across the road when he isn’t looking and climb over the walls to get into the school. Despite the fact that she’s wearing black tights and her skirt goes way past her knees, she warns Joon-sang not to look up her skirt while she’s standing on his back. His response? “I can’t. You’re too heavy.” Lol.

Still hung up on the fact that she’ll only let her boyfriend touch her, she refuses Joon Sang’s help to get down but relents when she realises that she needs help jumping off the wall. Way to beat us over the head with this symbolic gesture.

That done, she reminds him in lieu of thanks not to forget the lunch broadcast that they’re supposed to do together and as a parting shot, he tells her that her zipper is open. Turns out he’s referring to her bag. Oh, Joon Sang, way to flirt with a chick. But that’s the seventies for you.

Naturally, being a bad boy, Joon-sang blows off the lunch broadcast show to take a nap on the rooftop. Miffed, Yu Jin airs her grievances and calls him out for being so irresponsible. This amuses Joon-sang greatly and he goes to the studio, only to find her jiving to ABBA’s Dancing Queen. I think we are supposed to find this endearing?

But Yu Jin’s embarrassment is just starting. He comes across her sketchbook of water colours lying around and flips through it despite being told not to. This causes her to storm out of the studio in yet another huff.

We know Joon-sang has a brain but does he have a body to match? The next scene has him showing off his athletic prowess in a volleyball match. It’s not exactly Sports Illustrated, but you try telling that to Che Lin. You have to wonder if seeing Joon Sang in utilitarian grey sweats is getting her all hot and bothered, what’s going to happen if he actually showed some skin. You’d probably have to hold her down and sedate her. 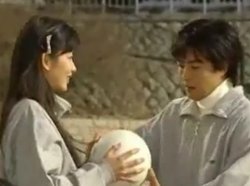 No octogenarians were harmed in the making of Winter Sonata. [Image via http://www.koreanfashiononline.com

Eyes glazing over from the sheer impact of all those pheromones, she informs her classmate that “men need three qualities: Intelligence, raw instinct and emotional sensitivity.” Somewhere, countless ahjummas and grannies are nodding their heads vigorously in agreement.

Whatever it is, you have to marvel at the magnitude of this chick’s delusions. After school, she approaches Joon Sang and tries to bulldoze him into going out with her. Obviously he likes her but he’s the kind of guy who has trouble expressing his feelings. Worry not, she’s here to help him! Needless to say, he rebuffs her. Again.

School’s out and we learn that Yu Jin is a budding portraiture artist and that her mother sells fabric at the night market. She is harassed by a drunken passerby on her way back but fortunately, as the almighty Law of Convenience would have it, Joon Sang happens to be passing by and after a brief scuffle, all three of them get hauled to the police station. Joon Sang and Yu Jin bond over the former’s bruises and the fact that neither of them has a father.

I’m sorry but this is as far as I got without wanting to maim someone.

Oh God, this is the drama that got grandmas and middle-aged housewives experiencing their second flush of spring? I’m going to put it down to nostalgia and the setting because there’s really nothing groundbreaking about the story or characters. Bae Yong Jun’s Kang Joon Sang is just like any other tormented male lead with a marshmallow center. He’s a world of hurt just waiting for the right chick to enter stage right and show him life’s many possibilities. And speaking of chick, while I understand the kind of character that Yu Jin is supposed to be, Choi Ji-woo is driving me nuts with her performance. If the first episode is anything to go by, she has only three kinds of facial expressions: 1) outraged 2) prissy 3) blank. If I have to see her turning her nose up in the air one more time, I’m going to break something.

Getting this far was a chore. I’m not sure if I have the will to watch the next one.