Okay, it’s official. I am on such a Running Man high right now that if the regular members were cast in a sitcom together I’d be on it in a minute. Actually, with the kind of chemistry they have, I think it would be really interesting to see them in a comedy sketch show together.

You know, I’ve never watched X Man or Family Outing but I can see why MC Yoo is so well-loved by audiences. He’s a genuinely funny guy who’s not afraid to laugh at himself and he’s really good at helping people fit into a group. I love that in episode 18, he chose to do the Love Boat challenge with Lizzy, who had just joined them as a regular member, because everyone else had chosen Ji-hyo.

And then he had a fantastically dorky moment pretending to be the captain of the school’s dance team because he wanted the CG flower effect that Joong-ki and Yong-hwa were given in episode 17. I may have started watching Running Man for SJK but I gotta say I am a Yooruce Willis fan now!

Speaking of Joong-ki, as much as I think he’s adorable, I want to see him live up to his reputation as the brain of the show and pwn all of them (like what Yong-hwa did in episode 17.) Come on, Joong-ki! I know you have it in you! Think man: what would Gu Yong-ha do? 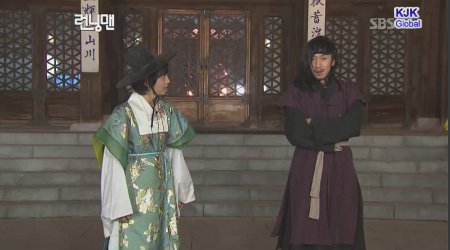 And since we’re on the subject of what I want to see in the show, I wish the producers would make better use of the concept and location. I think filming each episode at a different landmark is a great idea. I just don’t think they’re making the best use of the places or their resources at the moment. For a start, there’s definitely room for more action in the show. The games can be a bit of a hit and miss; I thought the card game, for instance, was too static for an action-oriented show and there were others, such as the one where everyone had to draw a maze in episode 12, that were just a waste of time. Seriously I’d rather watch them do some improv or sit around and talk to one another.

What would be really cool is if they were to have a special edition episode a la Top Gear where the members are split into teams and they spend the entire episode racing each other to a particular destination. But I can only imagine the kind of logistics nightmare that the producers will have trying to co-ordinate everyone’s schedules. Still, one can hope, right?

Have some caps of my favourite scenes. As an aside, I should mention that I like the Gary/Ji-hyo/Joong-ki “love triangle” for the reactions they get from the rest of the guys. I’ll be back with episode 19 of Sungkyunkwan Scandal (Oh God) in my next post.

A bit of background on the challenge: Basically, it’s Ji-hyo vs the guys. What they have to do is get her heart rate to exceed 130. As long as one of them succeeds, they each get a running ball. If they fail, she gets the prize.

So it’s Joong-ki’s turn and what does RM’s resident pretty boy do? He enacts the ultimate noona fantasy: 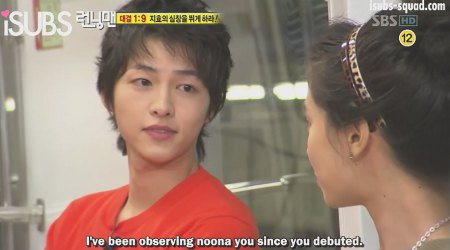 Understandably, Ji-hyo is all :DDD 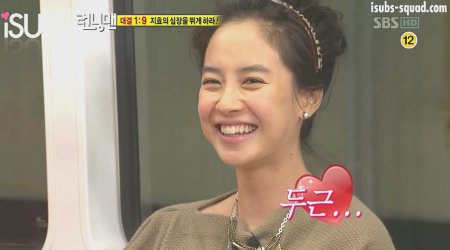 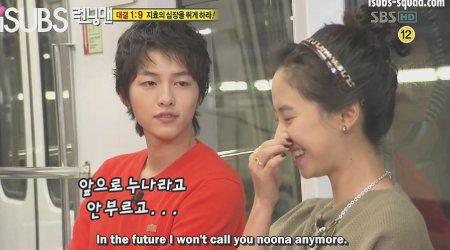 The rest of the guys, on the other hand, are trying to keep their dinner from revisiting them… 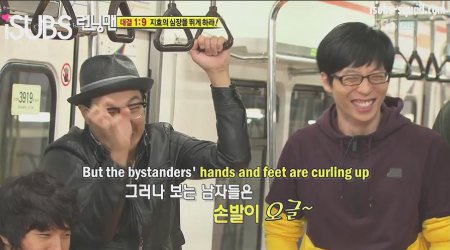 Gary is *not* amused. 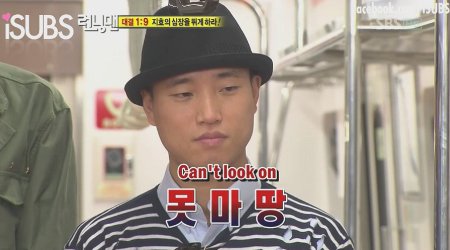 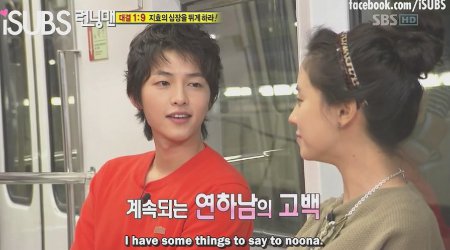 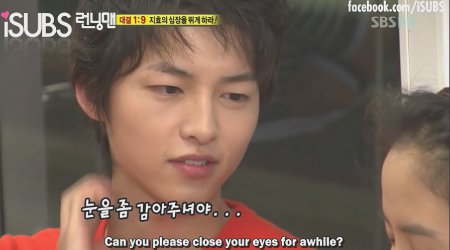 OMG, this is like the visual equivalent of a 10-cheese pizza. And yet, no one can tear their eyes away…

Joong-ki swoops in for the kill…

Oh darling, you are such a ham ♥ 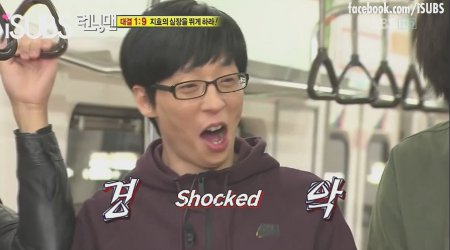 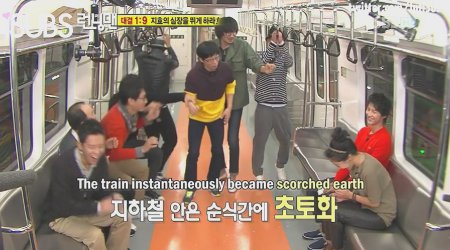 Gary tries to look on the bright side… 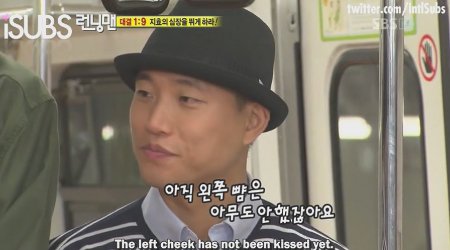 And is rewarded when Ji-hyo tells him he is her man (on Mondays at least) :D

Once again, Joong-ki and Gary are duking it out for Ji-hyo’s affections. The winner gets a running ball while the ignominy of wearing hot pants in public awaits the loser.

Our flower boy is pretending to be a high school student asking his senior out. As you can see, Joong-ki has come prepared! 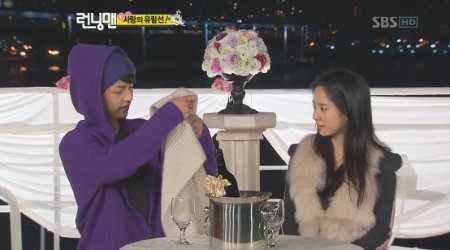 He leads her to the upper deck…

And fulfills Ji-hyo’s secret dream…acting out *that* scene in Titanic.

Once again, Ji-hyo is all :DDD

The guys, on the other hand, cannot believe the cheese they are seeing XD 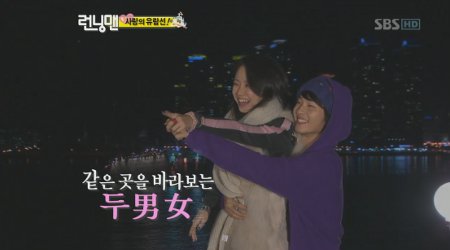 K-drama directors of Korea, please grant him his wish to “love like crazy” in his next drama. If this isn’t a hint, I don’t know what is.

Joong-ki finally makes his grand confession: noona…will you go out with me? 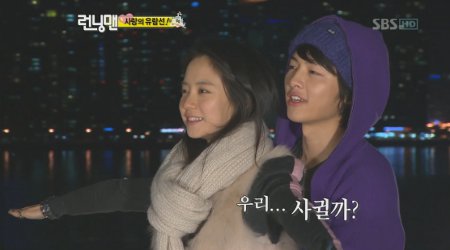 Fast forward to the end of the challenge. It’s time for everyone to make their final declaration of love and boy does Joong-ki really really want to win that running ball…

OMG Joong-ki. You’re supposed to write the name of the person you like, not an essay! Anyway, what he’s saying is essentially this: though he is someone who is afraid of many things, what scares him the most is the thought of never seeing her (Ji-hyo) again.

As you can see, the guys are clearly lapping it up XD 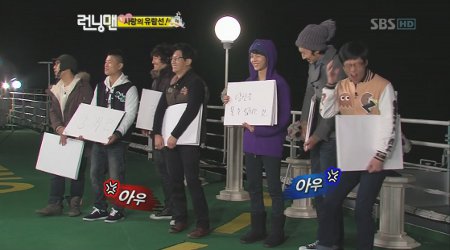 Jong-kook: What do you mean you'll never see her again? We're regulars. You see her every week!

It’s time for the moment of truth! Unfortunately for our darling, despite his best efforts, he and the running ball are just not meant to be XD 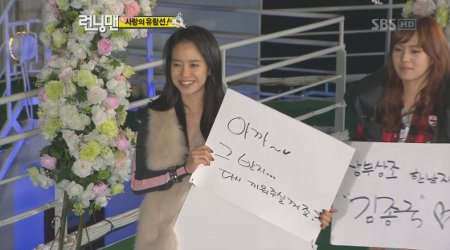 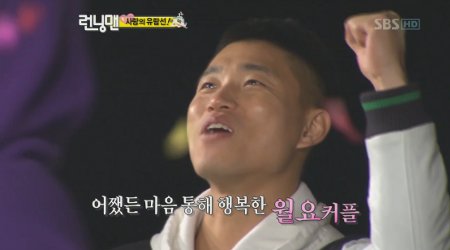